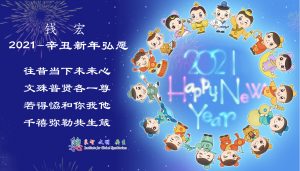 The Symbiosism: a Paradigm shift in UN narrative

The Symbiosism: a Paradigm shift in UN narrative

First of all, on behalf of the Symbiosism Culture Think-Tank Foundation of Canada, I would like to warmly congratulate the Environmental Program of United Nation’s first Asia-Pacific Science-Policy-Business forum on the theme of  “Healthy Recovery of People, Nature and Economy”, to  be held online on October 5, 2021.

We believe that it is now very necessary and timely to address the topic on “Towards a Healthy Rebound for People, Nature and Economies” from the perspective of a sustainable, equitable and tolerable economic rebound.  We hope that the upcoming forum will make historical impact on the international community to take this opportunity put in place new strategies, technologies, policies and actions because the state of Anthropocene – marked by the profound impact of human activities on earth is not at a far away distant future, but has already arrived and is now at a critical state in our current generation.

Humans, who imagine themselves as the spirits of all things, are often unable to escape from the unintended fate of being controlled and consumed (reverse phagocytic effect or self-inflicted extinction) by our own creations. Today, the unintended reverse phagocytic effect has resulted in major divisions, conflict and confrontation between interpersonal, inter-event, inter-object, inter-group, inter-ethnic and international communities.  In the last five hundred years, the popularization of the “human-centered” ideology has greatly changed the thinking of humans and the values we hold, to which end, is the driving force behind the relentless expansion of navigation, the use of scientific technological humanistic tools (i.e. thermonuclear, biochemical weapons, infrastructure, economic and trade exchanges, planning, markets, standardization and replication of scale) which has collectively led to an exacerbation of an unintended reverse phagocytic effect. This is especially so under the current impact of the corona virus global pandemic, climate change, environmental pollution and extinction of microbial diversity. These events have in total brought an unprecedented pressure on the natural systems of the earth to an unbearable point for all living things on earth, including microorganisms and human beings alike. As Annalie Nevitz has warned, if humans do not repent and rethink the thresholds of their current lifestyle, it could lead to the “Sixth Extinction”. Will humanity then survive?

This “planetary crisis” is also known as a “global symbiosis crisis”!

Let us briefly review the evolution of life on Earth. Human beings and other living organisms came to being in life together more than 60,000 years ago and have gone through “three ages” of civilization and regeneration, namely, the gathering and hunting civilization (Naturalopocene), the industrial and commercial civilization (Anthropocene) and the ecological civilization (Earthropocene).

The origin, growth and development of the living world has a significant impact on Charles Darwin’s theory of “natural selection and survival of the fittest”. This can be understood as competition, coexistence and symbiosis (Symbiosism of co-opetition) or Symbiosism in short. Symbiosism actually penetrates the entire process of “metabolism” from inorganic matter to organic life of all living organisms.

This current generation is sitting on the edge of a major historical shift from the “Anthropocene of Industrial and commercial civilization” to the “Earthropocene of ecological civilization”.  The prevention of a further risk in planet depletion would require an acceleration of a rapid scientific technological progress, a timely policy intervention and a framework of regulatory governance and sustainable financial system in shifting the trillions of dollars previously used into developing greener, more sustainable markets and healthier planet. Thus, the current expansionary footprints of human civilization need to be reversed by shrinking and limiting growth! This requires a paradigm shift in our mindsets, values and lifestyles.

In order to address the “global symbiotic crisis”, the international community urgently needs a philosophical dialogue to confront the current contemporary issues in meeting the needs of human civilization and the paradigm shift. We have combined the concept of “sustainability” proposed by the United Nations in 1987 and launched a global Symbiosis forum (GSF) dialogue in China in 2012. In 2018, we published a book on the Global Symbiosism: Chinese School of Defusing Clashes and Rebuilding the World Order. In 2020 during the corona virus pandemic, the Global Symbiosis Society was established in Canada, and a book with Chinese to English translation on SYMBIOSISM – The Mind Power to agree on an Innovative Lifestyle, was written and published in Canada in 2021 by Onebook Press. 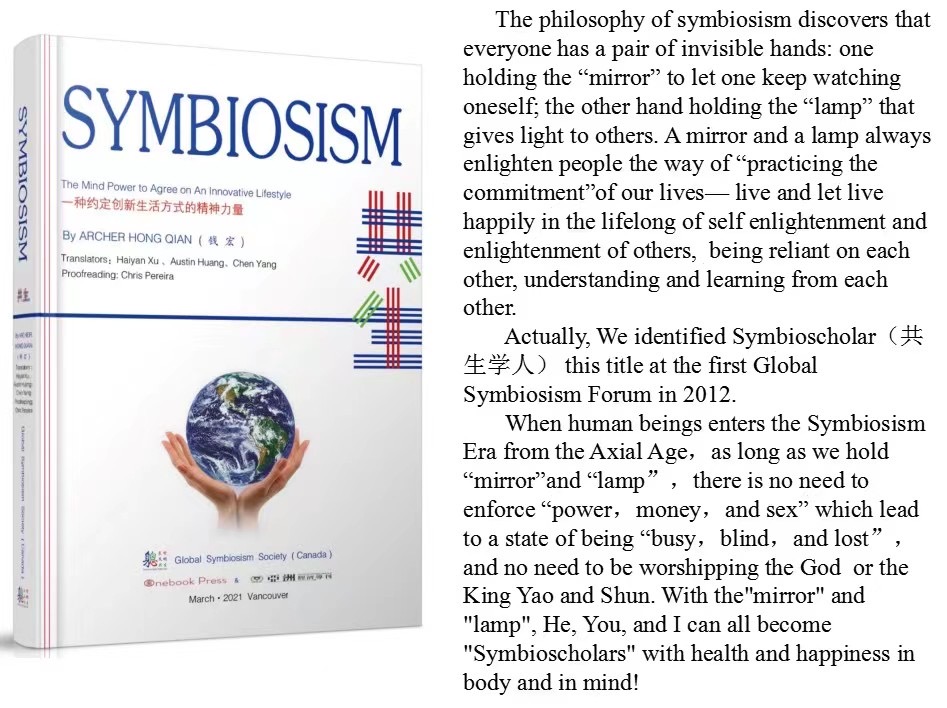 We fully agree with the United Nations’ Environmental Program Initiative on Green Technological Market Development driven by Science and Technological Advances, Empowerment Policies and Innovative Financing. We have already integrated Science, Policies and Business Forum in our Global Symbiosis Forum to which we hope to establish a working partnership with United Nations to embark on a joint journey towards rebuilding a healthy recovery of people, nature and economy.

We believe that the United Nations was born in the midst of the 1945 war to ensure “security, peace, human rights, and coexistence” in the world. However, in addressing the United Nations’ continuity in securing a sustainable ecological civilization, global coexistence and peace, we would like to reemphasize the suggestions we made to the UN Secretary-General during the UN’s 75th anniversary in 2020.

a、An update on the United Nations’ Charter of human rights, sovereignty rights and property rights by a paradigm shift toward global Symbiosism, for the purpose of coexistence and sustainable peace.

d、The assignment of new functions to the Trust Management Council and upgrading the specifications of the Human Rights Council and merging the two councils into the Global Symbiosis Council, as well as establishing the Symbiosis Civilization Foundation.

e、The adjustment of the functions of the ECOSOC world organisations, drafting and formulating the “Global Symbiosis Convention”.

We do not want to witness the progressive disintegration of United Nations that has been painstakingly built by our previous generation!

Hence, we would like to take this opportunity on the occasion of the UN’s 75th anniversary, to start a philosophical dialogue in addressing the “three transcendent global issues”, while setting aside all prejudices and demands for privileges, to fully support Secretary-General Guterres in his work on the UN reform!

Finally, while addressing changes in the world, we need to ask a pertinent question – that is, are these changes made in anyway ethical and upright for humanity as a whole?  What I am talking about here is of course, the Symbiosism of “live and let live”. In other words, do all the organizational structures, powers, responsibilities and rights created to materialize that change exhibit the elements of Symbiosism as the starting and ending point?

This is a “to be or not to be” type of question for our current generation!

In viewing the macro world, one cannot help but appreciate the earth is one with its inhabitants (people, events and things) co-existing together in the Symbiosism way of life for a healthy body, mind and soul. Hence, the earth is the first, the Symbiosism is the way. 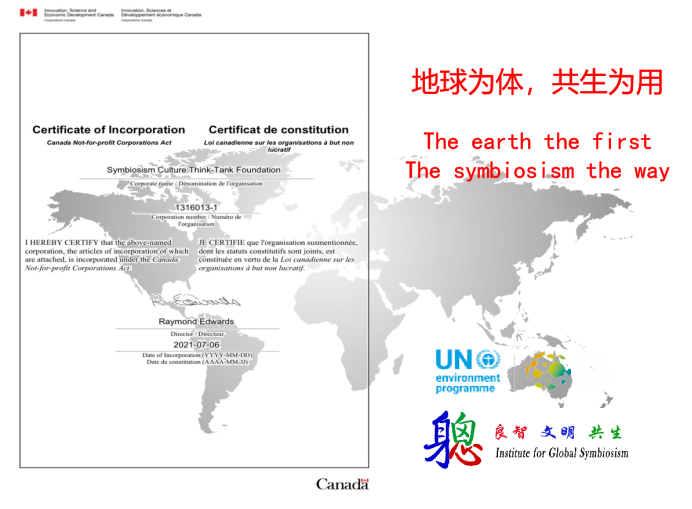 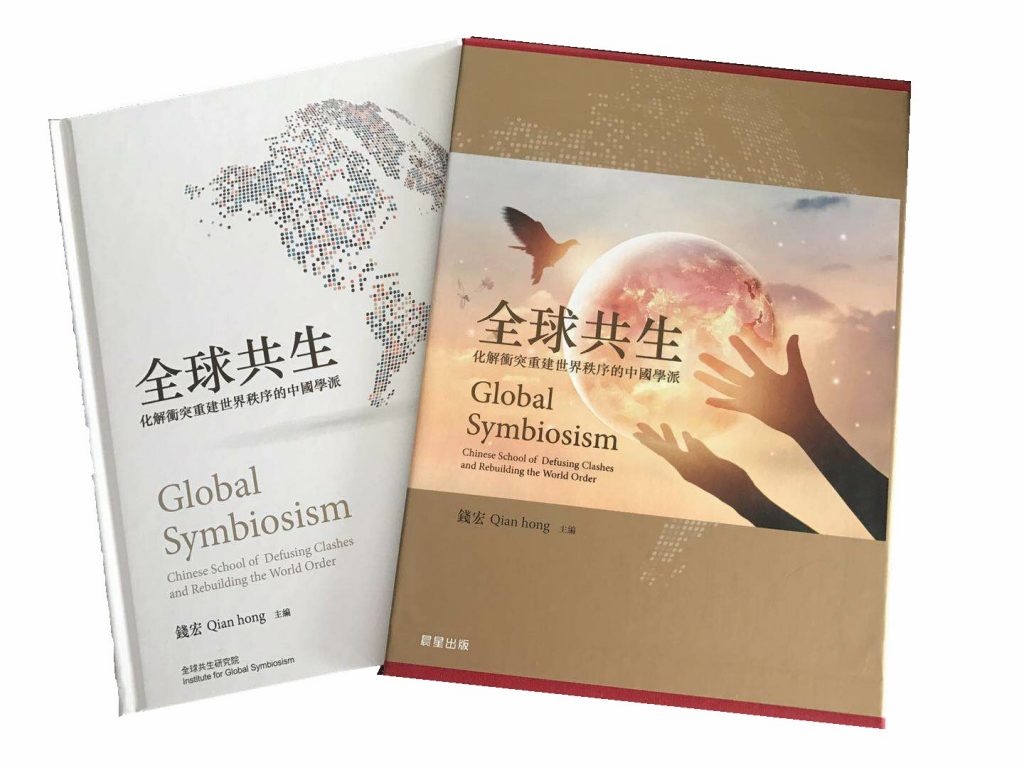 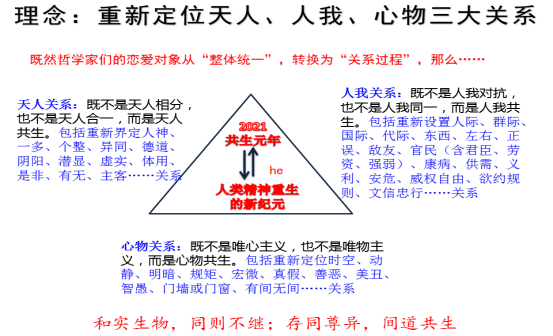